Behind the scenes
We had fun! Mike Stern featured in two tracks as a guest artist in “Chicken or Pasta” (2023). 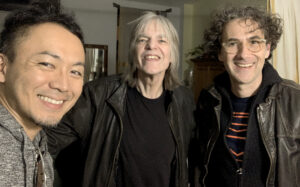 Besides working on the editing for “Chicken or Pasta,” I am sharing the interview, in Catalan, at L’Home del Jazz Interview with Pare Pons Radio 4 RNE.

I have so much fun doing this interview with Xavi Bundó at RAC1   Via lliure RAC1.

Our Western Tour was a fantastic experience and a priceless time with the bandmates. We are about to go into the studio to record new music — coming soon!

Covid postponed our first-time tour to the West Coast in 2020 and 2021. We are thankful to make it possible in 2022 with the Jazz Road grant, a national initiative of South Arts funded by the Doris Duke Charitable Foundation with additional support from The Andrew W. Mellon Foundation. Check our calendar and be tuned for more news.

I want to thank Mid Atlantic Arts and congratulate my fellow artists awarded along with me. Without the Mid Atlantic Arts grant award, our performances at two major Jazz Festivals won’t be possible. Three concerts in our first European tour after 18 months of lockdown; two at Canaria Jazz i Más July 16 – July 17, 2021, and one at Jazz á Juan on July 19, 2021, five incredible live music days – three different cities with magnific audiences – seven planes – three PCR tests. Mid Atlantic Arts supported these two engagements with the National Endowment for the Arts, the Andrew W. Mellon Foundation and the Howard Gilman Foundation.

Two years of hard work pays! Truly humbled that legendary bassist Ron Carter played in our Almadraba recording. Here is a short teaser of the studio rehearsal on May 21, 2018. Premiered @BAM Next Wave Festival at the Fisher Theater. This work is unreleased and will be sometime in the future.

Almadraba, my new musical work, is an intriguing new composition where the jazz, classical, and popular, driven styles interact with Iberian traditions paying homage to the traditional almadraba fishing in Andalusia.

Oscar Peñas’ Crossroads, (2016) Crossroads is the new jazz-fusion project lead by guitarist Oscar Peñas. It premiered at Dizzy’s Club Coca-Cola in NYC on Feb. 1st, 2016, and it features Gregoire Maret on harmonica, Moto Fukushima on bass, and Richie Barshay on drums.
Crossroads’ sound captures Peñas’ consistent technique, a rare sensibility seen in jazz. His lower intensity facilitates him to shade tunes with meaning and subtlety, a refreshing musical approach in today’s over-amplified jazz world.
Oscar’s cultural mixing and crossover melodies are clearly represented in this varied repertoire of originals.

” Spanish guitarist Oscar Peñas has attracted a wide variety of fans through his unique combination of classical, Spanish folk music and Brazilian grooves over an American jazz base.” – SiriusXM, Real Jazz channel

” Music of Departures and Returns is an enjoyable collection of styles and sounds from around the world presented with heartfelt joy and clarity. The music will certainly leave the listener with a joyful and playful feeling; Peñas’ focus on making good heartfelt music is a breath of fresh air.” – H. Allen Williams, JazzTimes

“…the album displays Peñas’s confident and clear phrasing, which is cast into high relief through interplay with Caswell’s violin.” – Tim Wilkins, WBGO

Peñas is a gifted writer, composer and a band leader…”  Steven Rosenfeld, ASCAP

Mr. Peñas, a crisp Catalan guitarist, has a new album, “Music of Departures and Returns,” that suggests a personal spin not only through the music of his heritage but also that of Cuba and the Americas.” – Nate Chinen, NY Times.com.